Every week I share five frugal things that I’ve done during that week just to show you that the small things you do all add up to a great frugal lifestyle where you can learn to live a fabulously frugal life.

Before I start though, I do want to say that being frugal to me is about getting the best value for our money – it’s not about doing without for us or about not having nice things.  We all have different financial situations and we’re all frugal for different reasons – we’re frugal so we can afford to do nice things together.

1) I bought a pre-prepared leek and potato soup mix reduced to 31p on Sunday and used my soupmaker to whip up a batch of leek and potato soup which did my lunch for Monday and Tuesday.  There would have been enough for Wednesday’s lunch too or even to pop in the freezer for another time but I don’t like freezing leek and potato soup as it seems super gloopy when I reheat it so I popped a big portion next door for my friend’s lunches too. 😉 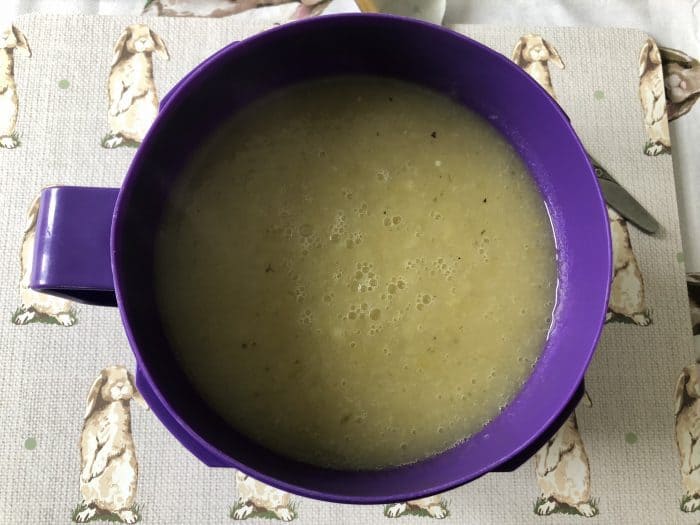 2) I don’t have much jewelry but I have been looking for something I could use to pop the few bits that I wear regularly in for a while now.  Originally, I was after a small jewelry box but just before Christmas, I saw some lovely little trinket dishes in Tesco that would sit lovely on my windowsill but I couldn’t bring myself to pay the £15 that they were charging.  I was hoping they’d be reduced at some point as they did seem quite overpriced to me so I waited and this week, my patience paid off.

They were reduced to £2.75 which was a much better price and one that I was more than happy to pay! Now the things I wear most often along with some of my Mam’s jewelry have somewhere to live and I won’t lose any more earrings because I just took them out and put them down wherever.

3) We’ve been hearing on the local radio a lot about a new broadband speed for new customers who sign up to Virgin so even though we’re midway through our contract and only called them a few months ago to see if we could save on our bill (which we did), we thought we’d give them a ring to see if we could get a deal on the faster broadband that they’re advertising.

Somehow, after about 10 minutes on the phone, most of which was spent on hold, Mr Frugal managed to get the new broadband top speed package AND a new box that’s just been released for free!

4) I finally managed to get my living room, stairs and landing carpets fitted – you might remember that I’ve been saving for what seems like forever for this but every time I get close to the amount we need, I spend it on a holiday (like Milan and Nice) instead because I would genuinely rather make memories on holiday with the kids than have a new carpet but this time when I got to the amount I needed, I managed to hold off booking another trip and actually got the carpet ordered.

I didn’t even shop around last time because the guy we used when we got Miss Frugal’s bedroom carpet was so much cheaper than the rest and did such a good job that we just went straight back to him.  Again, he gave us a great price on the carpet we picked and did such a great job that we’re over the moon with it. To give you an idea of how much they cost, we paid £415 for the living room, downstairs hall, stairs and upstairs hall which is a bargain I think, although I’m not a carpet expert. 😉 . We went for a mid-range priced carpet as we have the two dogs and although Buddy is an old man in dog terms, Monty is still just a puppy and he’s a menace at that.  We considered putting off the new carpets until he was a bit older but I just couldn’t live with what we had any longer so we bought some nice but not too expensive carpet and actually it looks a lot more expensive than it was.

We’ve been putting some money to one side each month since we came back from Nice and because we do it on payday, we don’t even miss it.  We’re going to continue to put the same amount of money to one side now to add to our slow-growing emergency fund because if we were OK to do without the money for the carpets then we can continue without it easily enough.

I absolutely LOVE them – they totally change the feel of my house!

The rug was from B&M in the sale and cost £10 and actually, I think Miss Frugal might have even paid for it now that I’m writing this as it was bought for her room when her carpet was replaced but she decided she didn’t want it in there anymore

The carpet guy offered to take away all of our old carpets and underlay for £15 but I said no and loaded the car up with it all myself to save the £15.  I almost wished I hadn’t though when I saw the queue for the tip but still, it saved me £15 and taught me that the tip on a sunny Sunday afternoon is NOT a good idea.

5) Last Friday night, after a very very long week involving my Dad’s funeral and a garage flood, Miss Frugal and I found ourselves flopped on the settee while Master Frugal was out with his friends and Mr Frugal was at work.  We were both in very ‘meh’ moods were feeling a little bit overwhelmed by the week we’d just had and if I’m honest we were feeling a bit sorry for ourselves.

We decided to go out for tea but because it was half six on a Friday night, the first three places we went were so full that the wait for a table was a minimum of half an hour.  We ended up at Frankie and Benny’s which is somewhere we haven’t been for a good 10 years I reckon as Mr Frugal decided we were boycotting it at one point as the prices went up at the same time the portion sizes seemed to go down.  He was at work though and there was literally no queue to get in as it was only half full so we decided to give it a go.

It was pretty expensive to be honest but while we were deciding what we wanted, I did a quick google search for ‘Frankie and Benny’s discount code’ and managed to get a voucher for 40% off the cost of the mains which was delivered by email to my phone about 30 seconds after signing up for their newsletter.

I won’t be going back without a discount voucher as I did find that it wasn’t particularly great value for money even with the voucher.  It was just what we needed to get us out of the house though when we were feeling a bit down so on this occasion with the voucher it was worth every penny.

I’m including this in my five frugal things, even though it’s a meal out, because it’s a reminder to ALWAYS search for a discount voucher before parting with your money. 😉

As usual, we’ve been having some really good discussions this week over in our Live Well, Spend Less Facebook group.  We’d love to welcome you to our little community if you fancy popping in.

Come over and join us!

As always, we’d love you to join in with us by sharing your five frugal things from week – whether it’s an Instagram picture (#5frugalthings), a blog post or even a video.  Just add your link to the linky at the bottom of this post.

You don’t have to share five things you’ve done, anything thrifty or frugal that you’ve been doing is perfect.

You’re more than welcome to copy and paste the badge above but it would be even better if you could let your readers know that you’re linking up with the five frugal things linky by adding a little line to the bottom of your post like this one:

I’m linking up with this Cass, Emma and Becky in this week’s ‘Five Frugal things I’ve done this week’ linky.

‘Things are Looking Up’ Essential Oil Roller – will help with Depression, Stress and Anxiety….

Today I'm sharing an essential oil roller which I believe will help with depression, stress and anxiety.  It's certainly helped...