In anticipation of my freezer clear out this week I am making some bolognaise sauce to be frozen for some quick dinners when I am back at work next week.
I haven’t bought anything in especially to make this, I have just used what was already in the freezer and I am trying to make it without the help of a bolognaise sauce packet mix!
To save on time, I have just thrown all the ingredients in the slow cooker and now it’s going to quietly bubble away all day without any help from me. When its done, will let it cool and portion it up for the freezer.
Super Quick and Easy Spaghetti Bolognaise Recipe
Ingredients
Frozen mince, Quorn mince (just a bit as I had a bit left over from something or other), frozen chopped onions, two tins of chopped tomatoes, garlic, a teaspoon of sugar, a teaspoon of basil, a teaspoon of oregano and some chopped fresh parsley that I will add a bit later.
Method
Throw ingredients into your slow cooker, give a quick stir and leave for the day.
Don’t forget to turn it on though otherwise tea will be a Big Mac and Fries 😉 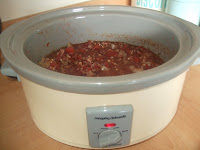 Just mix ingredients together, put the lid on and job done! 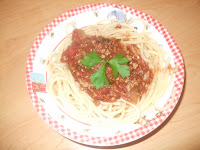 UPDATE: This is the finished version that Miss Frugal wanted for Supper after she realised that it was finished cooking – Check out the fresh parsley on top…. Most unusual for Chez Frugal but I got a parsley plan from Asda reduced to just 20p.

This is my menu plan for the week. I usually do my weeks plan on a Friday ready for shopping...