I made Cheats Chicken Pie for tea tonight and it was delicious.  I had really good intentions of making the tastiest home made chicken pie ever – I was even going to make the pastry from scratch.  I got to Tescos to buy the lard for the pastry and they had that readymade puff pastry stuff for just 81p….  It was practically the same price as making my own so I decided that I would cheat just a little bit.
Then when I got home I realised I had forgotton to take the chicken out of the freezer so rather than abandon the chicken pie plan, I decided to use the two tins of Marks and Spencers chicken in white sauce that my dad gave us a while back.
I lined a pie dish with some of the rolled out puff pastry and added the chicken along with some chopped up, fried bacon.  I added the lid, poked a hole in the top for the steam to escape from, brushed some milk over the top and flung it in the oven for about 15 – 20 minutes…. 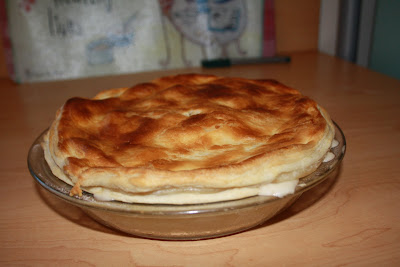 Mmmmmmmm, a bit brown but still a fine looking pie if I say so myself…. 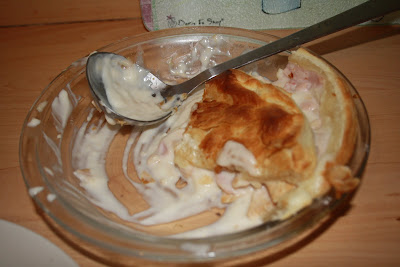 There’s a little but left but Miss Frugal has asked me to save it for her for later!

With the leftover pastry, I rolled it out as thin as I could and sprinkled some cheese over one half.  Next, I folded one half over the other and rolled out a bit more before cutting into strips… 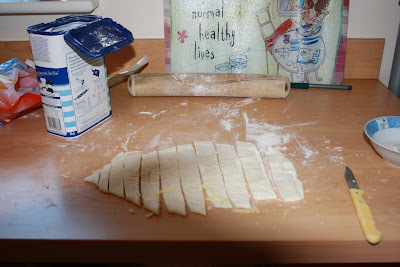 I brushed my strips with milk and twisted them a bit and put them on a greased baking tray…. 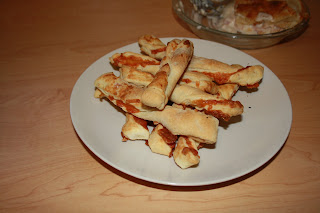 So I may have cheated a little bit but I think it worked out well in the end!

Can you believe it's the last day of February today?  How mad is that!I am off work this week so...