We had wraps for tea tonight and in true frugal style we even made our own wraps…. They were easy to make, cost practically nothing and have just been declared as ‘awesome’ by the kids.

I love recipes like this – so simple that Miss Frugal can do all of the measuring and mixing. She takes it so seriously and the measurements have to be exact. I’m more of a ‘that’ll do’ kind of a cook which probably accounts for some of my more un-domestic goddess moments. 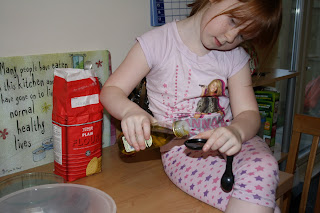 Throw all the ingredients together in a mixing bowl, then get your hands in and squish it all together until it all sticks together…. then knead it for about five minutes until it makes a nice dough.

Now decide how many you want to make out of your dough. We made eight and my blobs looked tiny until we rolled them out. I made the mistake of letting Miss Frugal roll the dough out so some of our wraps were a little out of shape but they did the job. Roll them out as thin as you can (or thicker if you prefer them that way and then they are ready to be cooked.

I put a tiny bit of olive oil in a frying pan and rubbed it round and then cook each one on a high heat for about a minute on each side. They will have little brown spots on them when they are done.

We then put little bowls on the table with cucumber, lettuce, ham, cheese, tomato and sweetcorn in and let the kids make their own wraps. I made some curly fries too but the kids were that busy with their wraps that after demolishing two each, they were full. 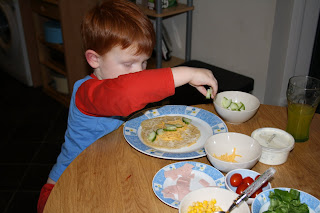 By the way – I know that the kids have their pyjamas on again but at the minute the want to put them on as soon as they come in from school. They do have other clothes lol….

Did anyone used to watch Newsround when they were younger? I always used to because it was on just before...