So much for tomorrow’s activity of making books…. Little Miss frugal just caught sight of the instruction video and ‘just had’ to make her book tonight….
She also didn’t like my suggestion about the book being about what we had done in the summer holidays and much preferred to make hers about a princess who lived on the beach. 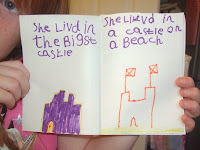 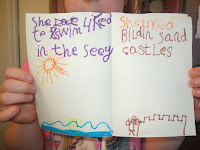 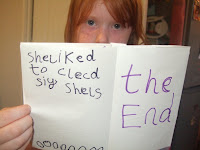 Excuse the spellings, she is only six…. And the reason that she has a mood on in the last pictures is that she thinks that she drew ‘The End’ too big and didn’t want me to take a photo of that bit.

We had fun making it but Master Frugal is in bed and I don’t think he will make one on his own tomorrow if his sister isn’t making one and now she’s already done one, she says she can’t think of another story to make a second. So now I need to think of some thing else to do tomorrow….

Tomorrow we are going to make home made books and draw all of the things that we have done so...