AKA – Them ones that MacDonalds make 😉

Don’t you just love kids and their honesty? I told them that we were having pancakes for breakfast this morning and they had the cheek to say they would rather go to MacDonalds! Apparently, MacDonalds pancakes are much nicer than mine.
Never one to be outdone, I decided that I was going to make MacDonald’s stlye pancakes better than even MacDonalds could make them so I sent them off to play on the Wii and turned to my trusty cookbook collection for some inspiration. After all, I have about a million so I knew one of them would have a recipe in it that would do….
Three hundred recipes later, Nigella came up trumps and I found a recipe that looked like it would compete with MacDonalds.
American Style Pancakes
30g (2 tablespoons) butter
225g plain flour
2 heaped teaspoons baking powder
1 teaspoon sugar
pinch of salt
300 ml milk
2 eggs 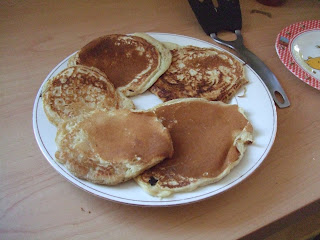 The Verdicts – ‘Way better than MacDonalds’ and ‘Awesome’

We decided to follow Make Do Mum's example and still go for a walk even though the weather is really...