I’m working with Britmums and British Gas at the moment on a campaign to help educate people about energy conservation which is perfect timing as my next post about how to have a Frugal New Year was going to be all about reminding you how to save energy as a family.  I know I’m always going on about saving energy but it really is important and to make sure you really get the message, I’m going to share with you something that my daughter was taught at school:

To a 9 year old it’s a no brainer really, why would you not try to use less energy when it not only saves you money but is also good for the planet!

I think we all know the obvious tips for reducing energy consumption around the house, things like only boiling the amount of water you need when using the kettle to make a cuppa or fitting energy saving lightbulbs in every room and we know that we should always turn appliances off at the wall rather than leaving them on standby but apart from that, what else can you do to use less energy and how can you encourage children to do their bit too?

From an early age, we’ve made sure that both our children are aware that the more energy we use at home, the more money it costs us which means we have less money for treats.  It’s really important that they understand that things cost money as until they understand that concept, it’s difficult to get them on board with trying to save energy.

We encourage them to turn lights off when they leave rooms and not to leave the TV or games consoles on when they aren’t playing with them and they’re really good at making sure that they don’t leave the doors open when they’re playing out and running in and out of the house as they know that this makes the house cold and costs more to heat.

One thing that we need to watch them with is when they are charging their DSi and 3DS which is frequently at the moment seeing as they are going through a Mario Kart obsessed phase.  Did you know that the chargers for these (and phones, laptops, ipods etc) all continue to use electricity if you leave them plugged in and switched on – even when they’re not plugged in to the applicance?  In this house we have a lot of gadgets and lots of chargers so we really have to make sure that they always remember to turn them off at the wall, otherwise it could cost us a small fortune! 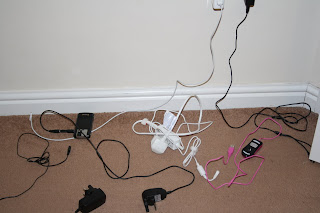 Also since we got our new washing machine that tells us what temperature we’re washing at, Miss Frugal has been very helpful doing the washing with me making sure that she uses the lowest temperature she can.  Washing at 30 c uses around 40% less energy and washing powders these days are formulated to perform well at lower temperatures so we don’t notice any difference other than in our lower bills.

I think the next step in getting the children even more involved is to start using an energy monitor like the British Gas smart meter so they can actually see how much energy we’re using and then see something visible to show that we can reduce that amount.  Hopefully, this will encourage them to find more ways that that they can use less energy which will save us money now but also get them into the habit of conserving energy ready for when they’re paying they’re own bills.

What do you do to use less energy around the house?

Disclaimer – I’m participating in the British Gas smart meter campaign. Smart meters work with an in-home display to show how much energy you’re using in pounds and pence. You can see how much you’re spending by leaving your phone charger plugged in all the time, or the heating on at night. And when you can really see how much you’re using, you can start to make small changes to become more efficient. Smart Meters automatically send British Gas readings so they represent the end of estimated bills! British Gas is committed to install 1.5 million smart meters by the end of 2012.

Meal planning is probably the single biggest change I made when I started out on my frugal journey and it's...