I have just played a writing game with Miss Frugal that she really enjoyed so I thought I would share it with you.

All I need was write the first line of a story and then I let Miss Frugal do the next line. We took it in turns writing and ended up with a little story. 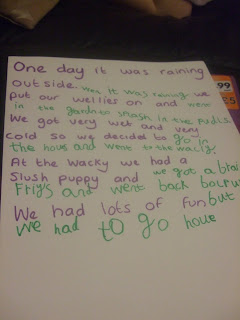 We started spashing in puddles and ended up with having a brain freeze after having a slush puppy at the Wacky Warehouse!!!

I’m not sure what to do for the rest of the day. Its not very nice weather and we have already been bowling (Hollywood Bowl 1p each during half term mornings) and to the pictures to see Fantastic Mr Fox. On the subject of Fantastic Mr Fox, I found it a bit strange, its definately not aimed at the youger audience in my opinion. They used the word ‘cuss’ frequently thoughout the film as a subsitute for f*ck which didn’t bother me as the kids were none the wiser but overall, I thought it was a bit slow and a bit strange.

I don’t think I’ll ever get a job as a film reviewer will I?

Does anyone else have a clutter cupboard like mine:I know its not a cupboard, it's a bookshelf but 'Clutter Bookshelf'...