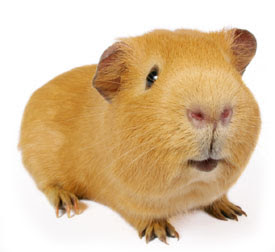 After months of begging and pleading and promising that they will take full responsibility for them, I couldn’t take anymore and I caved in. We now have two baby guinea pigs called Miley and Lightning.
We bought them from Bunny land, just outside of Whitby. Now I’ve never been there before but I imagined it to be like a little bunny heaven, with bunnies and guinea pigs all frolicking about freely in a green field with fluffy white clouds in the clear blue skies above them.
I know that’s a bit far fetched, its just the image that I had in my mind before we went. In reality its in the garden of a farm and has bunny hutches stacked on top of each other, most packed with mommy bunnies and their babies. The guinea pig part was in a barn with a leaky roof with hutches all round the edges and 2 big hutches in the middle of the floor marked boys and girls. To be fair, they all looked healthy and well cared for and they weren’t overly cramped or anything – I just really thought it would be a bit (lot…) different.
Anyway, we bought the guinea pigs and their big indoor cage, and brought them back to their new home. Poor little things are still a bit nervous at the moment. The kids have only been allowed a few little holds as I wanted them to be settle in peacefully. They are so cute though, I think that I love them more than they do….

We've had a baking afternoon today in an effort to keep the kids entertained while the rain continues outside!  We...