Some people (the real Domestic Goddess’ of this world) can make up recipes as they go along, they are able to just throw some ingredients together and make a michelin starred meal. I have never been able to do this, I can only just put together a nice meal with a recipe to follow!

That’s why I am so pleased with what I made today. Miss Frugal declared that she doesn’t like homemade pizza anymore and couldn’t possible eat it for tea (does she not realise I have a meal plan to stick to) so we decided on salmon for her along with the leftover macaroni cheese.

The only way I have ever cooked salmon fillets before is in a frying pan with a small amount of olive oil and some lemon, but today I poached the fillets in some milk until they were cooked and then I added some cornflour and some basil to the milk and stirred it until the sauce thickened. I know it’s supposed to be parsley but I was all out so I used what smelled nicest from my spice jars (I know – not a very reliable method of choosing what herbs to use). I then poured it over the salmon and served it to fussy Miss Frugal whose verdict was – ‘The best salmon ever!’

So…. I actually made a sauce (of sorts) from scratch which is quite a big thing for me… Sad, I know.

I still made homemade pizza for Master Frugal as he doesn’t like salmon. It turned out better than last time as we used a rolling pin to flatten the base rather than going for the deep pan effect: 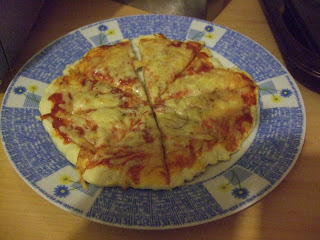 For pudding they had last nights choccy cinnamon cake and custard.

Mr Frugal and I are having Jambalaya later on.

I have just made Choccy Cinnamon cake with Miss Frugal, we're not sure what it will taste like as it...