Do I have the fussiest four year old in the world? I think so….

He is such a fussy eater and has to be coaxed to eat anything different, which is why I tend to stick to the same meals on my meal plans. When I find something he likes, I stick with it until we all get sick of it.

It’s only in the last six months or so that he has started to be even slightly more adventurous. The Christmas before last he would only eat plain pasta (still his favourite food). He doesn’t eat fish or meat, apart from sausages, and his dinner is usually ours minus any fish, meat or sauces.

We try all sorts of things to get him to try new food because we know that when he does, 9 times out of 10 he enjoys it but we rarely succeed. Today we had a mashed potato competition where we all made our own mash and he was the judge of whose was best. He chose mine (obviously) and said he enjoyed it but when I put some on his plate to eat he just would not eat it. Mr Frugal is firmly against forcing the kids to eat anything they don’t want to because he had to eat food he didn’t like when he was young so we just take the view that he will grow out of it eventually and keep trying gently.

I do struggle with packed lunches ideas as I like to keep things varied for them but his fussy habits mean that more often than not he will end up with jam sandwiches…. So tonight we made some cheesy pops (our version of cheese straws) to pop in the freezer for a bit of variation in his packed lunches for the next week or so. He had great fun getting his hands in there and getting messy and more importantly, when they were cooked he had a couple and loved them. 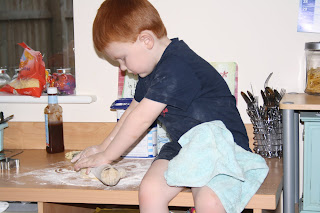 Some children like to wear an apron when they know they are going to get messy, some children aren’t that bothered about it but for some strange reason, we decided that if we were going to bake we absolutely had to go upstairs and change into our PE kit!!!

Anyway, last time we made these we decided to make them using our train cookie cutters but they were almost unrecognisable (check out the pics here) so this time we used the gingerbread man cutter and apart from the odd legless or armless few where Mr Frugal forgot to position the cutter correctly, they turned out OK? 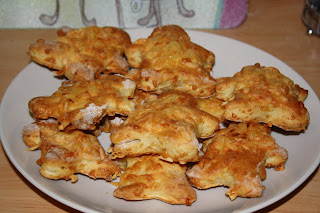 Miss Frugal has just made Jammy Buns for us all. I've made them with her a couple of times before...