I love some of the things kids say, Miss Frugal has just seen an advert on TV for personal loans and asked if she could get one so that she could buy the new doll she is after.

The doll she wants is a baby version of one she already has!  Just when I thought we had every type of doll on the market – we have one who crawls and has tantrums, one who poos and cries, one who’s ill and cries, one who swims, and her all time favourite – the one that does nothing and cost about a fiver.

Anyway to cut a long story short, we’ve decided to introduce a reward chart to keep a record of her (hopefully) good behaviour for the rest of the Easter holidays.  If she can be extra good then I will buy her the doll that she needs wants.

I was going to have a look round the internet for a chart to print out after I’d had my tea but she has just proudly presented me with her own version. 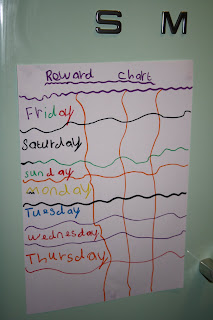 So now she has to get 3 smiley faces a day and no sad faces for the rest of the holidays to get her new doll.  We’ll only give her a sad face if she’s really naughty as I want to use this to motivate her and after the school holidays I’ll find a better system to use for her to earn her pocketmoney.

She’s already worked out three jobs she is going to do tomorrow to earn her three smiley faces!  I’ve told her it’s not just about the jobs, it’s about her overall behaviour but who am I to interfere if she wants to do jobs as well. 😉

I love weekends!Today's been another lovely day, although it didn't exactly go according to plan!  We were originally going to go...