Today’s been another lovely day, although it didn’t exactly go according to plan!  We were originally going to go have a paddle in the sea and an ice cream followed by a nice afternoon in the garden with a BBQ but the weather was a bit on the chilly side so we ended up having a quick walk on the beach followed by a visit to the boot sale and a movie afternoon at home. 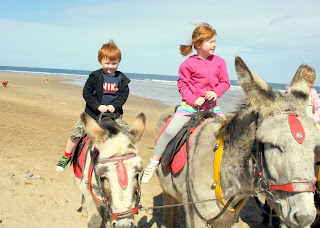 The kids had a ride on the donkeys at the beach, Miss Frugal loves anything horsey and has had a few horseriding lessons so she was over the moon to be having a ride on a donkey.  She chose the biggest one – Zippy.  Master Frugal was not as excited but his donkey Peanut looked as quiet and calm as a donkey could look so he decided he would have a go!  They set off on their walk down the beach and all was well…. 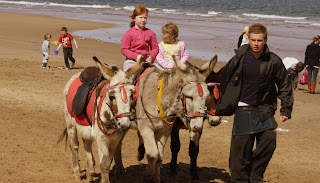 This was the picture five minutes later when the man brought them back….  Can you see what’s missing from the picture?  Yep, Master Frugal.  He never made it six foot down the beach before he started to scream. Poor little thing was terrified that the donkeys were going to race off so he ended up sat on my knee quietly crying while Miss Frugal enjoyed herself.  She hasn’t stopped talking about it all day.

I’m off now for a nice long bubble bath followed by a glass of wine 😉  Enjoy the rest of your weekend.

We've had a lovely day today in the sunshine,a nice relaxing morning followed by a trip to the park, a...