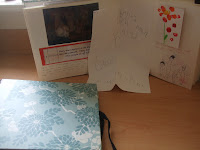 Ever since the kids were born I have kept a memory book for them, anything important or special thats happened to them has been stuck in their book and they love looking through them every now and again.

We have just been having a look through them and having a good laugh at the pages in each book where we have written down some of the funny things that they have said so I thought that I would share some of them on here:
* Grandad, you need to get the Dr to mend your belly cos its very big!
* Daddy, will you scratch my willy for me….?
* Look at all the stuff we just nicked! Said whilst walking out off a shop with loads of stuff we had bought.
* Grandad, is your willy big like my dads or little like my brother’s?
* We give my brother medicine even when he isn’t poorly…. Not a good thing to say at the doctors and honestly we don’t. She meant colic stuff that we put in his bottle.
* That looks like dog poo… said about the tea I had lovingly cooked
*My sister just ruined my whole life…. well she did move his favourite car!
* My dads willy stinks! Said to the woman at the checkout in the supermarket when he broke wind (is there a nicer way to say that) in the queue. He was mortified.
The books are filled with special photos, holiday memories, things from school, letters to Santa, first drawings and loads of other memories. I hope that in years to come, the kids will treasure them.