This weekend is officially family fun weekend, at least it will be when Mr Frugal finally gets his backside out of bed.  Just because he’s worked the night shift does not mean he can delay the start of our Family Fun Weekend lol. 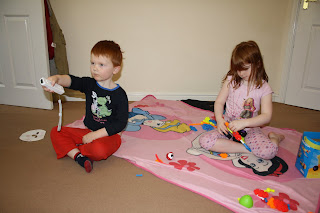 I have had a fun morning with the kids playing on the Wii, building weird creatures using K’nex and watching TV and they are now excitedly waiting for Mr Frugal to get up so we can get to the Wacky Warehouse where the fun will begin (for them not us).  Although, as you can tell by the picture, they’re not quite excited enough to get dressed!

After the Wacky we are either going bowling or to the pictures and for once I’m even going to let them have one of the extortionately priced pick n mix’s that they always look longingly at.

We are out for tea tonight and I think we have changed our minds about going to TGI Friday’s because even though it’s treat weekend, TGI’s will cost a fortune and we would probably get the same enjoyment out of a KFC bucket for about a quarter of the price!

Our train would have been arriving into London about now if we hadn’t had to cancel the weekend and to be honest, I am still a bit dissappointed that we haven’t gone but the postie has just delivered a nice fat cheque following my complaint about the fact that we couldn’t use the free train tickets we were given last year so I guess I would rather have it this way.  We get to spoil the kids for a weekend whereas if we had gone to London it would have been on a strict budget and they wouldn’t have had many extra treats….

I think I am going to go and put the pots away in the kitchen now, some ‘accidental’ banging of the pots and pans may just wake the snoring giant upstairs….

Exactly a year yesterday we were in Disneyland Paris.  It was an absolutely perfect trip, there were no tears, tantrums...