It’s like Valentines day in the Frugal house today, it started when we popped to Morrison’s after school and Miss Frugal saw some of those gingerbread hearts that came in a pack with pink icing and pink glittery stuff, the ones you decorate yourself. She asked me if she could get them for her boyfriends (note the plural there!) and because I thought it was really cute I let her get them, extremely un-frugal of me at £1.79 for five biscuits!

Anyway we got them home and she has carefully decorated each one with a different boys name, apparently Jack, Kieran, James, Damien and Rebecca (don’t ask as I haven’t got a clue) are in for a treat tomorrow! 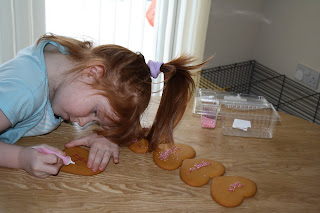 Look at the concentration on her face (whilst ignoring the hair trailing in the biscuits lol).
I asked her why she has so many boyfriends and she said it’s because they all love her and she couldn’t choose. You can’t argue with that, can you….?
Master Frugal was also feeling the luuurve tonight and has made me a lovely heart card with his daddy. No piccies of him making it though as it was a big surprise and I wasn’t allowed in the room. I asked if he would rather give it to his girlfriend and he says he loves me more than he loves her….. Aaaaw Although, to be fair, his girlfriend is a bit stalkerish, when we were at the school disco a couple of weeks ago and he kept running away from her. She said to me ‘It’s ok, he can run off but I’ll always find him cos I love him!’ 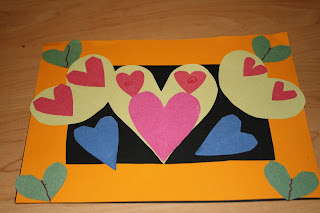 The 4th of February marks World Cancer Day. This is a subject that is very close to my heart after...