We moved into a new build house a few months ago and were a bit annoyed to find out that the builders, Persimmon, didn’t include turf in the back garden. (It also didn’t include an oven but thats a whole other story!)

Honestly though we didn’t think it would be that expensive to get someone in to do it after we had moved in so we decided not to pay the £450 that they were charging to do it for us.

After we moved in, we asked a few local landscape gardeners to come and give us a few quotes, the cheapest of the three was £850. So…….. We decided to bite the bullet and do it ourselves, despite the fact that we are definately not the gardening type.

This is the before picture: 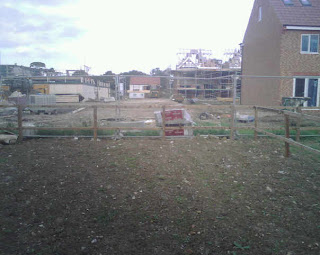 We started by throwing all of the big stones that the builders had left over the fence. Don’t worry, we didn’t throw them into the neighbours gardens, only on to the land that they were just starting to build on.

Then we hired a rotivator and a roller for the day and bought a huge bag of grass seed. The rotivating was not that difficult to be honest but I can’t say the same for the rolling. Who knew you had to fill the roller with water for it to work!

Considering we don’t have an outside tap (at £125 fitted by the builders – no wonder) and we left our hosepipe at the old house, you can imagine how many trips from the kitchen it took us to fill a 60 litre roller with just the kettle and a pyrex jug.

Anyway, several hours later, we finished rolling and managed to sprinkle the grass seeds. We did try to make a scarecrow but it really didn’t work so we thought we would chance the birds and hope they didn’t notice the potential feast in our garden.

I know, I know that was never going to happen was it?

So the grass grew but in patches and now needs more work doing to make it the garden of our dreams…. We have put in a small fence at one side so that we can grow some vegetables with the kids when we are more sorted and we have sprinked some more grass on the patchy bits. I hope I will be able to show you the after picture very very soon….

Welcome to the Frugal Family blog

Let me introduce us all…. I am 31 years old and I work in the complaints department of a large...