After a few trauma’s our Christmas tree is now up.

The first trauma was actually finding the tree and decorations! When we moved they just went in the garage along with the other million or so boxes…. It is freezing outside today but I still had to spend half an hour looking for a tree out there… I gave up in the end and we had to go buy one from Tescos (£10 reduced from £25 so not too bad).

I found the tree decorations so we spent a pleasant hour with the kids decorating the tree whilst singing Christmas carols and drinking Eggnog.

Well ok, we actually spent a stressful half an hour unravelling the Christmas lights and trying to stop the kids from arguing over who was going to put each bauble on the tree. While I’m being honest, there was no Christmas carols – it was actually Sky Sports News and you can replace the egg nog with a glass of wine for me and juice for Mr Frugal and the kids. But you have to admit that the first version sounds way more domestic and festive!

Before we had the kids we had the most beautifully colour co-ordinated tree you have ever seen. We actually bought the display tree from a shop near us which included some beautiful silver and purple decorations and was a complete bargain at only £15.00. But despite trying to get the kids to make their home made decorations to match my colour scheme it has gradually become less silver and purple and more anything goes. I still love it though…. 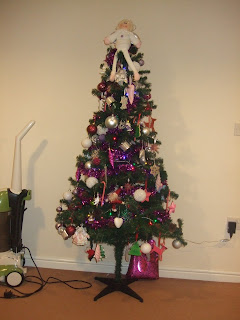 It does look a bit pathetic standing on the floor, we have a small Ikea table that is also lost in the depths of the garage somewhere and it usually stands on there so I will have to brave the cold again tomorrow to find it.

I will also have to find all of the other decorations that we put around the house ready for the weekend when we are going to Christmasify the rest of the house.

How to get a North Pole Postmark….

I am off work ill today as I have been up since about 4'o'clock coughing. I have dropped the kids...