First of all: AAAAAAAAGH (that was me screaming)

What started out as a lovely afternoon rapidly went downhill today.
As it’s been snowing quite heavily again around here we decided to build another snowman. Not just your average snowman, but a giant snowman. Mr Frugal wanted to build a giant snowman so that ours was bigger than the snowman over the road (that’s why the kids call him competitive dad lol). So we rolled three big snowballs, and stacked them up and Pattie 2 was born. Taller than the kids it was a wonder she managed to stay upright! 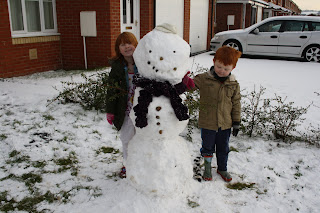 We went inside to get warm and watch Beverly Hills Chihuahua with a nice mug of hot chocolate each. But….half way through the film, the inevitable happened…. Pattie collapsed!

Both kids rushed out to try and save her but we were too late, her head and middle had completely crumbled. It was traumatic – you would have thought that a family pet had died or something.

After we managed to calm the kids down by building another, smaller snowman using the last remaining bit of Pattie, I served up a delicious tea of homemade lasagna, potato wedges and garlic bread. Well I say delicious but wouldn’t know really as I still haven’t tried it three hours later. In his rush to get to the table, Master Frugal tripped, twisted his ankle and almost ripped one of his toe nails off.

So, rather than eating my lovingly prepared tea, we took a trip to A&E, where Master Frugal proceeded to tell the Doctor that he was fine and it didn’t hurt a bit. I hate when kids do that but he is so nervous in case the Doctor chops off poorly bits (thanks for that information Grandad) that he tends to say that he is OK when he isn’t. Luckily (or not actually) his ankle was that swollen and his toe was still bleeding when we got there so the Doctor could see that it really did hurt.

The Doctor said that he couldn’t really see much at the moment because the foot was that swollen but he did say it definitely wasn’t broken. He has bandaged poor Master Frugal to within an inch of his life and we have to take him back tomorrow to see what is going on with his toe nail. He said they might consider a nail transplant (What!) or as it was only one of his little toe nails they might just leave it as the little toes aren’t important!!!

I am at work tomorrow so Mr Frugal will be taking him back. I am a bit gutted as I want to be there with him, if only to find out what a nail transplant really is!

Anyway, the kids are in bed now, so I am having a bit of a relax. Christmas is officially over tomorrow as the kids are back at school. I said this to Miss Frugal as she was going to bed and she gave me a big hug and said that I was the best mummy ever as we have had the happiest Christmas ever. Aaaaw, she made me feel all warm and fluffy.

Following my spice trauma recently and my resolution to expand my culinary repotoire (now there's a big word) I have...