After watching Kirsty’s homemade Christmas last week i felt inspired to make some salt dough decorations of our own. Now before we started I had my usual Domestic Goddess visions where I pictured our decorations as stunning works of art! As usual with my visions – the results were nothing like I hoped but we had fun making them so it was well worth it. 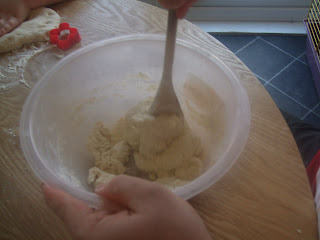 The dough mix is so simple.
All you do is mix half a cup of salt and a whole cup of flour and then slowly add one whole cup of water to the mix. You (or the kids) need to then knead the mix for 10 minutes – don’t miss this stage out as Master Frugal did and his gingerbread figures looked like they had large breasts after they came out of the microwave as the shapes went a bit bubbly.
We let the kids measure out their own ingredients as it was so easy, however, if yours are as messy as mine I would beware. I have just had to clean the lightshade in the dining room to remove the flour from it!!! 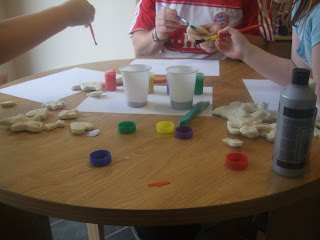 After our ten minutes of kneading, we used cooking cutters to make some nice Christmassy shapes. If you want to hang them somewhere nows the time to use a straw or something to poke a littl hole in the top.
I’m sure that when I was little we used to cook the dough in the oven but Kirsty says to microwave it – so we did. I put a few shapes at a time onto greaseproof paper on a microwavable plate. Give the shapes one minute initially and them keep going in 30 second blasts until the shapes feel hard when you tap them. As soon as they are hard take them out and get the next lot in while they cool.
Then its time to paint the shapes (yeay – more mess). 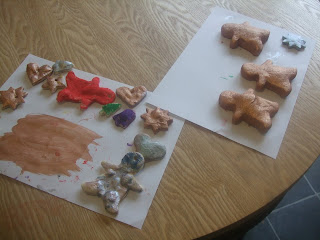 These are some of our shapes….. Interesting aren’t they?
I have hung some on the tree and they actually look quite cute. I will take some piccies later on and add them on here.

I have had a lovely day today, all of the parents were invited into school to do some activities with...