I have a Moshi Monster related dilemma but it’s not what you’d think – I’m not about to ask you what you think about letting children on Moshi Monsters (an online game where children adopt and care for a monster) as that ship’s already sailed.  Miss Frugal’s been playing on there for more than a year now and Master Frugal has just set up his own little monster so he can play online too.

My dilemma is actually about those little collectable Moshi Monster collectable figures you can buy – the ones that are £1.99 for a pack of two but you don’t know which ones you’re getting until you’ve bought the pack and opened it.

There’s loads of figures to collect and my two (and all their friends) are completely obsessed with them at the minute- they spend hours together playing with them, swapping them and generally admiring their collections and showing off when one has one that the others all want! 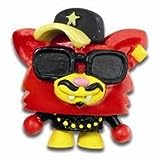 Miss Frugal is desperate for this little fella, an ultra rare Moshling called Blingo and every time she chooses a pack to buy she spends ages feeling them all to see if she can feel one that could possibly be the elusive Blingo, she then repeats ‘Please be Blingo. Please be Blingo.  Please be Blingo’ while she opens the pack but so far, no Blingo.

As she was poorly at the end of last week, I decided to go on eBay and see if by any chance someone was selling a Blingo to cheer her up, expecting to pay a few pounds for one – after all they couldn’t possibly cost much more as they only work out to £1 each. Right?  How wrong could I get – Blingo’s actually selling on eBay for upwards of £10!

Apparently there is a roaring trade going on in selling these little figures and I couldn’t resist pricing up some of the figures from the kids Moshi boxes although I wish I hadn’t now.  One of Miss Frugal’s favourite Moshlings, Lady Goo Goo, was up to £17.00 with twenty minutes still to go and there are a least another five selling for between £8 and £12.

The funny looking one with the sunglasses and dummy at the front is Lady Goo Goo and the weird looking green one next to her is Dustbin Beaver who sells for around £10.  I can’t believe that those two little figures could fetch around £25-£30 on eBay and I know it’s naughty but I’m seriously considering some sort of incident which would involve the disappearance of Lady Goo Goo and Dustbin Beaver – I had thought something along the lines of them running away together into the sunset and living happily ever after in the land of eBay 😉

What do you think – should Lady Goo Goo and Dustbin Beaver mysteriously disappear?

Growing up is hard (and expensive)….

It's not easy this parenting lark is it? Not so long ago, birthday parties for Miss Frugal and her friends...