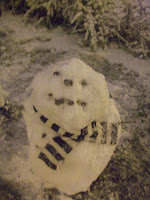 When it started to snow last night we decided to go out and play – even though it was cold and dark and the kids were already in their pyjama’s! After all, its not very often that it snows like that and usually when it does, either the kids are at school or I’m at work.

When everyone was dressed in about 6 layers of clothes we ventured out (well, I say everyone but Mr Frugal decided to join in the fun by standing in the warm and watching out of the window). After being hit by a few random snowballs when the kids managed to aim right, we decided to make a snowman and Pattie was born.

I have no idea why he is called Pattie but he’s now an honorary member of the Frugal Family and the kids love him -they even game him a kiss and cuddle night night.

I can see there being tears when he melts….

I am sure that most people have tracked Santa before on his journey around the world on Christmas Eve but...