It’s so hard not to compare your children.  Miss Frugal was so eager to learn and Master Frugal has, up until recently, shown no interest at all in learning to write.  I’m not worried too much as he’s only just turned five but I have been a bit stuck for ideas on what I could do to help him learn.

All of a sudden it seems to have clicked a bit for him.  He wants to learn and over the last couple of weeks he has gone from a unrecognisable scribble to being able to write his name reasonably clearly.

I keep trying to get him to pick out letters from the words we see everywhere and for the first time he is taking an interest and can recognise a few of the letters so we decided to go on an alphabet walk this afternoon.

I wrote all of the letters of the alphabet in his best Ben 10 notebook, armed him with a pen and we set off…. 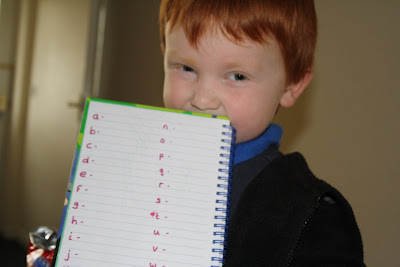 We had fun ticking off as many letters as we could and would you believe the letter we saw most off was apparently K.

I love some of the things kids say, Miss Frugal has just seen an advert on TV for personal loans...