Aaaaaaaaaaaaaaagh.  Why does this always happen on Bank Holidays – I look forward to them and the kids wake up in a grouchy mood that lasts all day!  They have taken it in turns to be pains in the arse naughty all day.

Mr Frugal was on nights last night so he slept till about one.  We played speed stacking for a while, played on the Wii and watched the Monsters Vs Aliens film (yes, again!) and generally argued our way through the morning.

As soon as he got up we went to the beach to play with the nerf thing that Master Frugal got for his birthday last week.  What’s a nerf you might say – well its some weird shaped things that literally flies for about ten miles when you throw it: 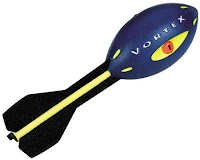 My body is not made for running and I’ll be honest – I thought I was going to have a heart attack at one point running after the bloody thing, however, I soon got wise and organised a game resembling fetch for the kids (actually it was just fetch – I threw, they fetched) while I stood in one spot.
When we came home we made chicken and mushroom kebabs for tea.  I had high hopes for these and practically bought out Tescos fruit and veg section in anticipation but the whingiest kids in the world were apparently not interested in being adventurous and would only have chicken and mushroom on theirs so they look distinctly boring and a bit brown: 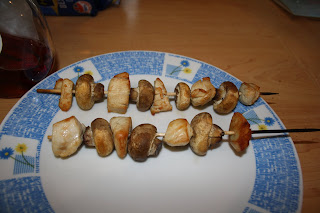 I was on the edge by this point and really looking forward to bedtime but we decided to make some easter nest before bed hoping to end the day on a high.  A mini tantrum by Mr Frugal meant that he was sent to bed before we had even melted the chocolate so Miss Frugal had to finish them off on her own.  You can see how tired she was in this picture, which was taken at twenty past six! 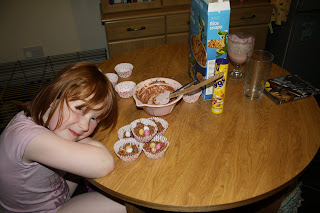 After they went to bed something really nice happened to cheer me up, Mr Frugal poured me a nice glass of rose and I got a lovely message from Single Mum at Diary of a (not so) Single Mum.  She has written a lovely post all about me as part of her Follow Friday series.  When I read it I felt all pink and fluffy and happy  it was so nice.  Every one should go over to her blog this minute and follow her 😉 Just because she’s fab (and her blogs pretty good too).

It's a Mummy's Life has started The Little Film Club - Each week she will share a prompt to inspire...