WARNING – LOOK AWAY NOW IF YOU DON’T LIKE FEET

Mr Frugal has only gone and sprained his ankle, how selfish is that? Does he not know that I had plans for this weekend that involved all four of us being able to walk! 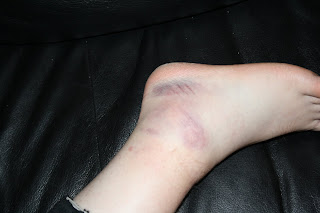 He came home from playing five-a-side football in agony and decided that we should go to the local A&E who said that it might be fractured but as it was after 5pm there were no X-Ray facilities so we could either go back the next morning or go to the bigger A&E 10 miles down the road for an X-Ray.

By this point it was 8pm and he was due at work for the night shift at 11.30 so we thought it was better to go and get it sorted so off we popped (kids in tow) for an X-Ray. After a half an hour wait (that’s not bad is it?) we got seen and it turns out it’s just a really bad sprain. I highlighted the ‘really’ for Mr Frugal’s sake as he is convinced that the doctor said it’s the worst sprain that he has ever seen! I’ve told him he’s just had too many painkillers but he is determined that he has the worst sprain in the history of mankind.

The doctor told him to go home and rest with his leg elevated so what do you think he did? Thats right, he went to work!

He was in so much pain that he couldn’t stay for long and ended up coming home at 2am and has been making little ‘Ow’ sounds ever since.

Another blog that I stumbled across today was Sticky Fingers. I loved the post where Tara interviewed her two children,...