Actually I’m not completely on my own but it is just me and the kids tonight as Mr Frugal has very cleverly agreed to do a night shift at work tonight. Seriously, why would anyone work the night shift if they didn’t have to.

He says its because I am off tomorrow and he thought that we could spend the day together! He over looked the fact that when he got in at eight in the morning he would be too tired to do anything other than go to bed….

Bless him, he didn’t quite think it through did he?

Tea tonight for the kids was Macaroni Cheese leftovers that I froze last time I made it. To be honest, it tastes nicer when its freshly made but it was ok reheated. It only took five minutes from getting it out of the microwave to serving it and the kids never tasted the difference so I’ll still freeze any leftovers in future but I think I’ll either leave it to the kids or maybes jazz it up a bit with something extra. Not sure what though….

This is a bit random I know, but can anyone remember what you used to call those things that you used to make at school. I think they were called fortune tellers or something, where you used to fold them up and ask people to pick a colour, and then a number and then you would tell their fortune….

I’m only asking because we discovered that they make great dragons tonight but I can’t very well tell you about it if I don’t know what it’s called, can I? 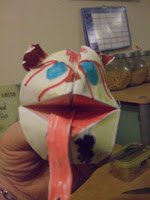 I used to make these all the time and I can’t believe that I have children at school making these now…. I feel really old!

EDITED TO ADD – Thanks to Pamela I now know that they are definitely called ‘Fortune Tellers’. I found an instruction video on how to make them on Youtube:

Well I've decided to take the plunge and rejoin Slimming World this week....I've been putting it off since the New...