On Saturday we’ve lived in our house for four years and although I’m gradually starting to get sorted, it’s still very magnolia.  I have no idea where the time has gone but I’m determined not to start another new year with decorate the house being one of my New Year Resolutions!

The children’s bedrooms were the first rooms we decorated when we moved in as we wanted them to be comfortable in their new bedrooms.  I really think it’s important that children have input into their own spaces so Master Frugal’s room had an alien / sky at night vibe going on and Miss Frugal’s was very a very girly style with butterflies, hearts, flowers and ponies everywhere.

But they’ve both grown up a lot in the last three years and they want more grown up bedrooms so we decided to give each of the kids rooms a quick and cheap makeover before we start on our own bedroom (which will hopefully be done before Christmas).

Last weekend we gave Master Frugal’s bedroom a makeover and it looks A-MAZING (if I do say so myself) but I’ll tell you more about that another day as that deserves a whole post of it’s own.

What I wanted to ask you today was for your help with an important decorating decision for Miss Frugal’s bedroom.

It’s for the wall long wall behind her bed, which was a complete bargain at £23 but no longer has the voile curtains in this picture which was taken at least a year ago. 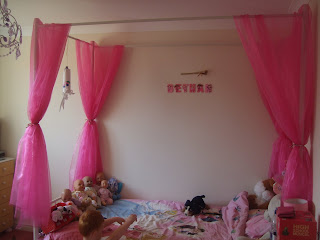 See this little fella, his name is Dustbin Beaver and he's a Moshi Monster figure - he's not just any...