I know it’s not ideal to get parenting tips from Harry Enfield but when I think about my children growing up, I always picture Kevin from that Harry Enfield sketch – you know the one where he goes to bed on the eve of his thirteenth birthday as a sweet, loving twelve year old and gets up the following morning as a moody, hormonal teenager. 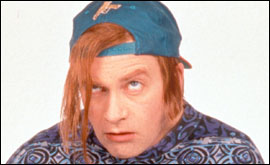 Unfortunately, Miss Frugal has decided to ignore the Harry Enfield book of parenting and has started her teenage moods early which I’m finding extremely challenging at the moment.  To be fair the moods are few and far between but we’ve had a couple in the last few weeks and todays one was particularly bad.

It started in the supermarket when I was letting the kids pick a little treat each from the toy aisle, she was having touble choosing between two and asked if she could have them both.  I said no (very nicely) and she had a little stamp and tutted at me so I told her to put both back as naughty children didn’t get treats.  This started a giant sulk which lasted until we got home when I told her to go to her room until she was ready to stop sulking and apologise for her behaviour.  I won’t give you a blow by blow account of the mood but I ended up grounding her (which she said she didn’t care about), taking her laptop and TV off her (not bothered) and giving her a black sack to fill with all her dolls and teddys.  The whole time she had a ‘don’t care’ look on her face and she stubbornly refused to apologise and in the end I told her I loved her very much but she was really upsetting me with the way she had been and I gave her a hug which she resisted at first but ending up hugging me back even harder and crying so much that she could hardly breathe.

She’s now in bed with no TV and only one teddy (her favourite one that my mam gave her) and she’s almost back to her usual loving self. I know I need to stick to the punishments I’ve given her but it’s really hard because I feel like I’ve gone overboard on her punishment, mostly because of the way she acted like she couldn’t care less about what I was saying.

I don’t believe in smacking children as I don’t think it sets a good example for them and once the initial sting is over, it’s over, whereas if you ground a child or take away their priveleges, the punishment lasts longer so it should be more effective, right?

What do you think, how do you punish your child?

I posted this a few months ago originally but seeing as it's my worst ever fashion disaster, I decided to...