Our Easter holidays have been rudely interrupted by a verruca infection!

I took Miss Frugal to the Dr’s a while back as she had three verrucas that just weren’t going away, he said they would go eventually and there was nothing else he could do as they don’t believe in referring children to the podiatrist unless it is severe.  He recommended we try and get rid of them using Bazuca so we’ve been applying that but they’ve gone nowhere!

In the last week they have at least double in size and are now huge, they are so painful that she can’t walk more than about two steps without getting upset.  I have taken her back to the doctors and he took one look and said they were infected and had pus under them which is why they had doubled in size and were so painful (yuck).  He has prescribed antibiotics and agreed to refer her to the podiatrist as they were so bad.  She is the first child he has referred for several years so they must be bad but now I’m supposed to wait for an appointment while she is in agony.  NO WAY.

I’m going to find a chirpodist who can see her straight away although I have no clue how much that will cost – not that it matters, I can’t watch her suffer.

To cheer her up, we decided to play a game together but she’s in such a fed up mood that she didn’t want to play a game we already had!  I remembered seeing this website a while ago so we investigated and agreed on Dominoes.  You choose a theme (we chose Spring) and then you print out your dominoes, choosing the full colour version or the colouring in version. 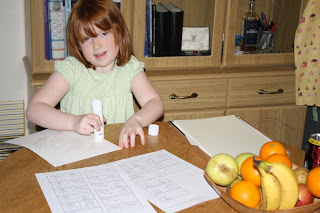 We glued ours to some card and she sat on the settee and coloured them all in really carefully, all going well so far. 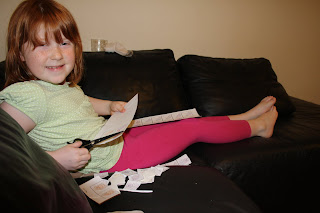 Then I made the fatal mistake of letting her cut the dominoes out, and considering she’s never played dominoes before, it’s really no surprise that not only did she cut the domino shapes out she also cut them in half, making loads of squares.

And that’s how to turn a game of dominoes into a noisy game of snap to cheer a very sad little girl up!

I have been sent this fab award by Tracy over at The Daily Mom Diaries.  Apparently I now need to tell...